**This was originally published in a similar form in The Stokes News on February 28, 2008. When the publishers changed websites a few years back, all links to archived articles were tragically lost. I am attempting to republish in my blog all of my columns that once appeared in the newspaper. Although much of this info is dated by now, there are still universal truths to be gained by reading it.

If you’re like me, you’re starting to notice the days getting longer and some daffodils prematurely pushing up through February’s hard ground. I actually saw a bird taking a bath in my birdbath today and nearly freaked out; I’ve never seen one do that in the 14 years we’ve lived here! And when I parked behind London Elementary School a few evenings ago, I heard croaking down at the creek—do they call them “peepers” maybe? The sound made me long for spring which is indeed right around the corner. Signs everywhere are pointing to my favorite season!

But until then I’m still working my way through the winter blahs. I’ve found some great ways to beat them. “American Idol” came back on in January, and that sure has helped. (I agree with those of you who say there is to be no idol before God, so yes, the title of that show bothers me. However, my family and I enjoy hearing excellent singing and critiquing below-par singing!)

A friend of mine declared vehemently in the fall that he would NOT watch such a cheesy show as “American Idol,” but I’ve heard he’s on the couch every Tuesday and Wednesday night as he boos Simon or agrees with Paula and Randy. He even headed up a “Fantasy Idol” draft. I’m quite impressed with the labor he went to—cutting out pictures of the Top 24 and working out an elaborate point system. My fantasy football season may have gone sour, but so far, I’m at the top of the leader board in the “American Idol” league! (Eat your heart out, Stokes News employees who beat me at Fantasy Football!) 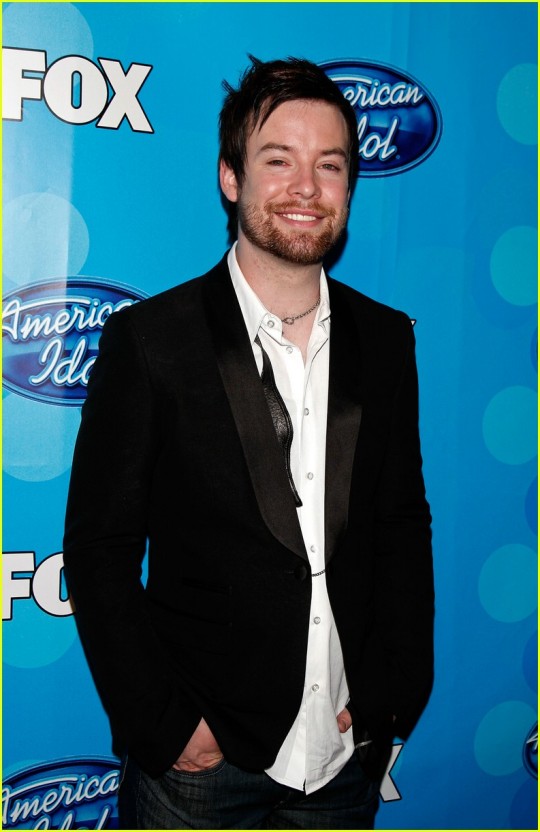 My favorite-ever “American Idol” David Cook was on the show in 2008 when this column was originally published.

Another excellent way of beating the late winter blahs is to have friends and/or family TV sessions to watch ACC basketball. It’s not quite as much fun as the World Series or football season was in my den, but it’s much better than watching “The Weather Channel” 24/7. (Then again, maybe not. How I love that weather stuff!) Somehow I have failed in my job as a mother—the fruit of my labors having produced two Carolina fans. It makes for interesting times when the Duke or NC State fans in our family get riled up. It’s a pretty even split around here.

However, my favorite way to attack those winter blahs is to get out into the community and be active. I enjoyed seeing so many of you at the South Stokes basketball games. And I must confess I was always disappointed during the varsity games. That gym should’ve been packed out instead of half-empty!

“I don’t have anyone playing on the teams,” you may say. Neither did I. Neither did Margie Dunlap or Carol Wiles. Horace and Brenda Boles stayed long after their granddaughter finished playing. Don and Nancy Lester could be counted on to hang around way past the time their relative played. The point is that it was great fun to watch, whether or not you had anyone playing. The sense of community unity was heartening as all races, creeds and genders pulled together for the common goal—a Saura victory.

For many years, my kids and I missed very few ballgames at my alma mater, South Stokes High!

Remember the days of Kenny Dennard when there was standing room only in the gym? They tell me the whole town came out to watch on the old paths of the 1920’s and ’30’s when the likes of my grandmother, Reny Richardson Smith, led Walnut Cove High School to victory. Athletics has always been a great common denominator for the varied types of people who inhabit our town and county. I encourage you to come out to watch your local teams whether or not you have a vested interest. You’ll find someone you know there in the bleachers, you’ll see some kid playing that you recognize and you’ll find that the winter blahs are lost in the cries of “Defense!” or “Let’s go, Sauras!”

I found the same camaraderie in London Gym this winter. How encouraged I was to be forced to stand at the door one night last week because the bleachers were jam-packed full! All to watch eight- and nine-year-olds play. That’s the spirit!

Even the little kids’ games are exciting at London Gym! And it’s free until tournament time.

These kids are the future of our town, our county, our world. Watching them learn to play as a team, to be gracious in victory or loss, to compete with as much determination as Alan Iverson or Tim Duncan—this warms the heart, chasing away winter’s chill. And I doubt Iverson or Duncan goes running into Grandma’s arms after the game or high-fives Grandpa to be congratulated on the lay-up that finally went in! I’d rather be in London Gym during tournament week than at an NBA arena.

And it’s not just boys. Girls play, too!

I sat in that gym a lot this winter, often contemplating its rich history. I thought of the marvelous teams London High School must have had back in the day. Not discounting those incredible teams I have heard tell of, I was nonetheless encouraged now to see children of all races playing together on that floor. What a different world our children are growing up in—not perfect by any means, but coming along slowly but surely in the area of race relations.

Yes, I still get a chill when I hear the part of Dr. Martin Luther King Jr.’s speech that says, “I have a dream that one day. . .little black boys and black girls will be able to join hands with little white boys and white girls as sisters and brothers.” Perhaps I am privileged enough to be able to see the dawning of that day, even on basketball courts in crowded gyms. 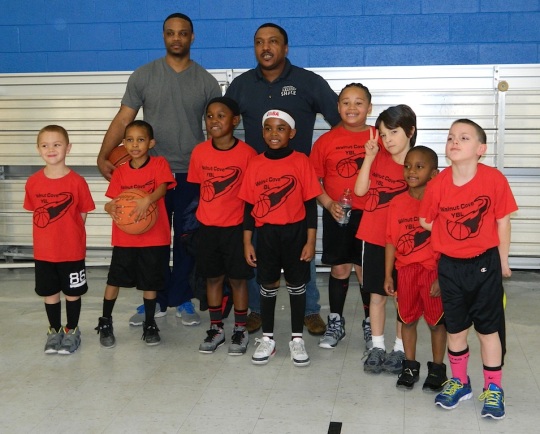 Children of different races play together at London Gym—something that would have been unheard of even 50 years ago.

So how are your winter blahs now? Mine are rapidly disappearing in the warmth of what I’ve experienced this winter. Next year, take my advice and experience community unity with me. Support the children who will one day be your doctors, nurses, teachers, firefighters, accountants, etc. Basketball may be almost over, but early season baseball is just around the bend. Put on your earmuffs and scarves, grab the blanket and get out of the house. You’ll soon find that the winter blahs are old news and that spring has sprung once more.

Tournament season in the Walnut Cove Youth Basketball League starts this coming Saturday, February 27, 2016. Come watch these kids play; I promise you won’t be disappointed. We had a nail-biter there just last night!