When it comes to motherhood and having children, I’ve hit the mother lode. No, I didn’t misspell that; I didn’t mean the mother load. I say what I mean; I mean what I say. 😉

“Lo, children are an heritage of the Lord: and the fruit of the womb is his reward. As arrows are in the hand of a mighty man; so are children of the youth. Happy is the man that hath his quiver full of them: they shall not be ashamed, but they shall speak with the enemies in the gate.” Psalm 127:3-5

My, how the world has changed since Bible days when children were considered a huge blessing. Today we consider two kids as having our quiver full. Or perhaps we want to have one and be done.

They interfere with our lives. They drool. They have to go potty in the middle of the movie. They have to be picked up after practice every afternoon. They want us to play Candyland with them, for goodness sake!

When we hear Deuteronomy 28 read aloud to us, we whoop and holler and shout hallelujah:

Ooh, glory–that sounds good! Uh, but wait a minute. Did it say that those blessings include being granted PLENTY of the fruit of our body? Uh, could we skip that part and just maybe go for the plenty of goods it promises us? We like plenty of money and other good stuff–but kids? Maybe not.

What happened in the last century that made us lose the mindset that having lots of children is a blessing?

The Duggars and their 19 kids.

Now I’m not saying that if you don’t have lots of kids, you’ve done something wrong. In this economy, many feel that they can’t afford more than one or two, if any. To each his own, I say. But why do we scorn those who believe in having as many children as the Lord our God will grant? Like the Duggars of TV fame, for instance?

Go ahead. Give me the Zero Population Growth spiel. I can refute that all day long. Did you know that you can still fit the population of the entire world in the state of Texas and give everyone a square foot of their very own? Okay, maybe that’s not enough room for healthy living, but it proves a point. So spare me the overpopulation speech. Believe me, I can argue incessantly against that using facts and figures.

I, for one, am not going to belittle the staunch Catholics or other folks who choose to let God bless their wombs with however many children come along. Again, to each his own.

My great-grandmother Richardson had 11 children. Her husband was the foreman of the railroad in Walnut Cove, a prosperous man who owned hundreds, maybe thousands, of acres on Piney Mountain Road. They weren’t dirt-poor sharecroppers who “didn’t know any better” (not that there’s anything wrong with sharecroppers–my other great-grandparents were just that). Papa and Granny Richardson were prominent members of First Baptist Church, bringing their large brood through the church doors every Sunday morning.

Nobody looked down on them or laughed derisively at them for having that many children. It was considered an honor.

Today we would joke, “Don’t they know what causes that?” Well, of course they did.

Or we would condescendingly say, “Oh, but we are much smarter now; we know how to prevent that.”

Smarter? Maybe. Or then again, maybe we’ve lost something in our modern haste to limit family size or simply abort babies if having them will inconvenience us.

“He maketh the barren woman to keep house, and to be a joyful mother of children. Praise ye the LORD.” Psalm 113:9

I was a barren woman once. Or so I thought. I became pregnant for the first time at age 24, carried him/her six weeks and lost him/her. I thought it was over already. But God blessed me with Meghann the next year. 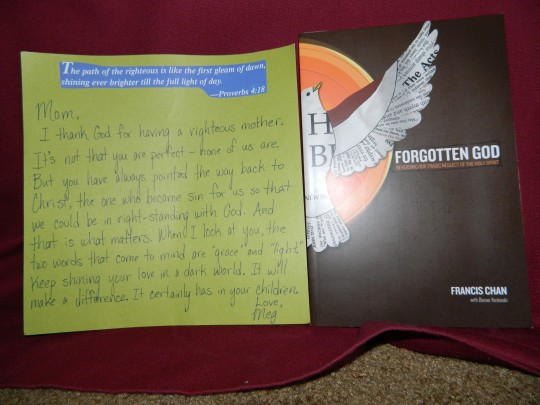 A book I have longed for and a heartfelt card from my Meggie on Mother’s Day 2012.

Then I miscarried again when Meggie was two and thought, “Oh no! I’m a one-hit wonder!” But not so. Chelsea came along the next year.

Chelsea walked into church on Sunday morning with these fresh flowers, an adorable card and chocolate for me!

Then came the long spell of barrenness. “But you already had the two children that make up U.S. average family size charts,”  you may say with bewilderment. Yes, but I didn’t feel complete yet.

Years passed and nothing happened. I took my temperature each morning. I bought ovulation kits. I cried, begged, prayed. It was almost six years before Elijah came along. How God told me way ahead of time that Elijah was coming is another story for another day, and a fascinating story it is. 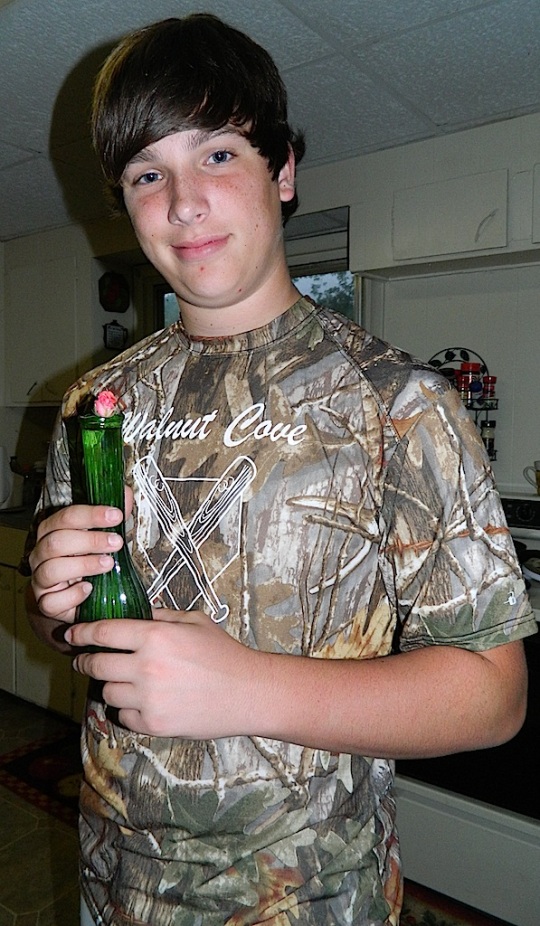 Elijah picked me beautiful roses for a sweet bouquet on Mother’s Day this year. I pressed the others and saved this rosebud so I could watch it open.

Before Elijah was even weaned, I was pregnant with Abigail. Surprised? Yes. Happy? Of course.

My baby girl Abigail gave me a hodgepodge of lovely things for Mother’s Day. She is a generous soul.

But then I began to brag a little. “Yep, just call me fertile Myrtle,” I’d say. I thought I had this fertility thing licked.

Not so. The factory seemed closed after that.

“But surely four was enough?!” you cry in 21st century horror. Well, not for me. I wanted a quiverful–in fact, had dreamed about having a houseful of kids since I was a kid myself.

Unfruitful years passed once again, and I figured the old biological clock had ticked out. But then I found out I was pregnant again when Abigail was four. Oh, the joy! Until 11 weeks later when I lost a set of twins. And then months later, when I lost a single baby.

Some would say, “Sister, give it up! Can’t you see God’s trying to tell you that you’re done? Have some sense, girlfriend!”

If I had listened to that, I would’ve missed out on one of the biggest blessings of my life–my little Malachi. He was born shortly after Abigail turned six and has been a joy that defies explanation.

Malachi apologized first thing Sunday morning that he hadn’t been able to buy me a present. I told him that was not a problem–that he could sing me a song at church for my present. As we gathered around the piano and sang “Dwelling Places,” his little voice rang out so sweetly on the chorus that my mother got teary-eyed.

Would I welcome more children? Gladly. Because I see motherhood as such a gift from God, and I view children as treasures. Who wouldn’t want gifts and treasures?

This past Mother’s Day was perhaps the most special one I have ever experienced. Because I’m not exactly a spring chicken these days (a spring robin or bluebird perhaps but never a chicken), I realize all too well how quickly children grow up. So having all five kids with me this past Sunday was exhilarating.

It wasn’t the presents. It wasn’t the cards, although I loved them all. It was the beauty of being with the treasures God has poured down on me and seeing their unconditional love for me, their very imperfect mother.

We worshiped and studied God’s Word together, we sang praise songs around the piano, we ate lunch with my parents, we sat at the baseball field watching Elijah play a doubleheader, we came home (not the two oldest who live away) to watch a movie together.

When my life seemed to be over at times in the past due to severe illnesses or depressing trials, God used my children to give me the incentive to fight for my life. When the enemy came to my gate and whispered to me that I might as well go ahead and die, my children spoke with him at the gate, just as Psalm 127:5 says. And I hung on until God delivered me from the pit.

He has made me a joyful mother of children. Praise ye the Lord! 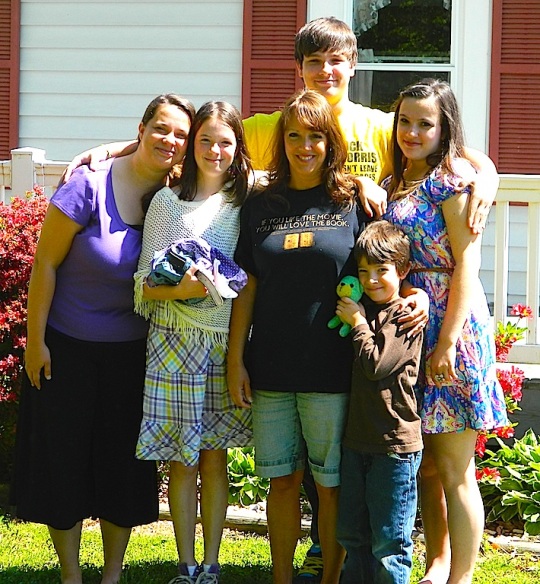 Me surrounded by my treasures on Resurrection Day 2012!