When I was a little girl, I loved going to Sunday School at First Baptist Church in Walnut Cove, North Carolina. My teachers would teach us wonderful Bible lessons, sometimes using the flannel boards that children so love. While the other kids clamored to hear the more popular stories–Noah’s ark, the baby Jesus being born, the miracle of the loaves and fishes–I was the odd man out.

You see, my favorite story was an unusual one–straight from the Old Testament in the book of II Kings (not a real popular book in the realm of children’s Sunday School!). Something in my little girl heart was touched to the core by the story of the woman of Shunem who talked her husband into building a chamber onto their house for the prophet Elisha.

II Kings 4:8-11: “Now it happened one day that Elisha went to Shunem, where there was a notable woman, and she persuaded him to eat some food. So it was, as often as he passed by, he would turn in there to eat some food. 9 And she said to her husband, ‘Look now, I know that this is a holy man of God, who passes by us regularly. 10 Please, let us make a small upper room on the wall; and let us put a bed for him there, and a table and a chair and a lampstand; so it will be, whenever he comes to us, he can turn in there.’ 11 And it happened one day that he came there, and he turned in to the upper room and lay down there.” 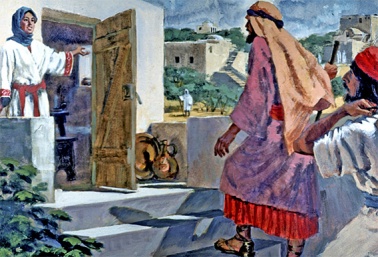 There’s more to the story, but that was the gist of it. Somehow, the thought of that Shunammite woman wanting to bless the prophet with a room of his own–a room in which to meditate on the Scriptures, pray unto his God, rest after the labors of ministry–blessed ME beyond measure.

I never forgot it. And I treasured a secret desire deep in my innermost being: the desire to one day do the same–to make a place for a man or woman of God to rest and find the presence of God in solitude.

But when I grew up and got married, there was never any room for visitors. We were financially-challenged much of the time, in small spaces with little room for guests. In our little rental house in Kernersville, there was no room. In the tiny mobile home on the Forsyth County side of Walnut Cove, there was even less room.

Yet still I dreamed.

When we finally bought a house, space was still tight for our growing family, but I wanted to be the Shunammite woman nonetheless! When a preacher came from Maryland to hold revival at our church in Winston-Salem, I quickly volunteered to provide room and board for him and his family, giving up my bed for them. Perhaps I couldn’t build a chamber on the side of my house, but I could give them my own chamber!

One day in about 2004, I heard that a big plantation-style house in Walnut Cove was up for sale. It had been the Pinecrest School–a home for mentally and physically challenged adults. I walked through the house, yearning to buy it so that I could take the little building to the side of it and make an “Elisha chamber” out of it. I drove through the property so often and talked to my four children about it so much that they started calling the little white outbuilding “the missionary house.”

But the asking price was way above our means, and the house was sold to people who chopped down the stately trees in front of my dream house and turned it into a horse farm rather than a place for burned out Christians and/or exhausted missionaries and evangelists.

And so I settled back into routine life, wondering if my dream would ever come true. When I eventually moved to Danbury, I decided that when the kids grew up, I would take one of the bedrooms downstairs and make it into a refuge for any Christian who needed a place to escape the rigors of the modern world for a time of prayer and seeking the Lord.

Still, that seemed like such a long time away.

And then one day in the spring of 2011, destiny came knocking on my door.

By then, I was a busy newspaper editor, trying to run a fledgling Christian ministry on the side. When my phone rang one hectic day, I really didn’t have time to talk. But the caller said something that stopped me right in my tracks.

Mrs. Lois Dodson Smith–a 92-year-old lady whom I considered the “First Lady of Walnut Cove”–wanted to meet with me and had directed her sitter to call me. I hurried down to Walnut Ridge Assisted Living to see what Mrs. Lois wanted. I had interviewed her in the past for my newspaper column, taking copious notes of her incredible memories of the history of my beloved hometown of Walnut Cove.

But I had gotten so busy working 24/7 for the newspaper that I had neglected to visit Lois in the past two or three years, and now I felt guilty when she called for me. Little did I know that her request to see me would change my life and start me on my way to fulfilling the dream I had nurtured since my long-ago childhood at First Baptist Church. . .

(Continued in “If You Build It–Part II.”)

Remembering Caden: a message to parents to cherish their children